Have you heard about the Land of the Rising Sun? What is the first thing that comes to your mind when we say Miso Soup? Of course, it is Japan. This old Asian island nation, whose culture and history are unique, has influenced the eating habits of millions of people around the world. In this article, we are going to talk about the famous Japanese soup. What is so interesting about Miso soup? Why is miso soup history worth knowing? How to eat miso soup? If you want to learn more about this famous Japanese dish, you are in the right place.

Miso Soup represents the very foundation of traditional Japanese cuisine. Today, it is served and eaten throughout the world. Some statistics have shown that about 75% of Japanese eat miso soup once a day. We don’t know when exactly it was invented but one thing is for sure, it was around even during the ancient times. It became very popular among the Japanese Samurai during the 13th century and during the Japanese civil wars. Initially, it

was invented for military purposes. It’s simplicity made it easily accessible at all times. It was more than easy to carry around which is why army officials adopted it right away. If you are hungry and in a hurry, miso soup is the right choice for you.

What Is Miso Soup Made Of?

The preparation of Miso soup is simple – the two main ingredients are miso paste and dashi. Dashi is a traditional Japanese fish stock and serves as a base for the Miso soup. It is made from dried sardines, dried seaweed, and dried bonito mushrooms. However, miso paste is the ingredient that influences the flavor of miso soup the most. During preparation, you can add some additional ingredients depending on your preference. Since this is a very simple dish, you have all the freedom to experiment. Add what you like the most! Japanese chefs usually add some onions, eggs, shellfish, or some tofu. Once prepared, it is usually served in small Japanese miso soup bowls. Some famous Japanese restaurants serve miso soup with rice.

How to Eat Miso Soup?

Perhaps how to eat miso is not the proper term in this case. People usually drink miso soup, small Japanese bowls are used for drinking miso soup and they look more like cups. You might be surprised but a spoon is not required to enjoy miso soup. They simply drink the soup from the bowl. Traditional Japanese soup is always served as a side dish. It is an unavoidable part of all the meals throughout the day.

Japanese traditional cuisine is known as one of the healthiest cuisines in the world. Dishes consist of a variety of fish and rice. Vegetables are a part of every Japanese meal. Even though it is very simple, miso soup is considered to be very healthy. If you are trying to avoid calories and get some proteins, miso soup is the right dish for you. It contains various vegetables and this makes it a good choice for pescatarians as well. 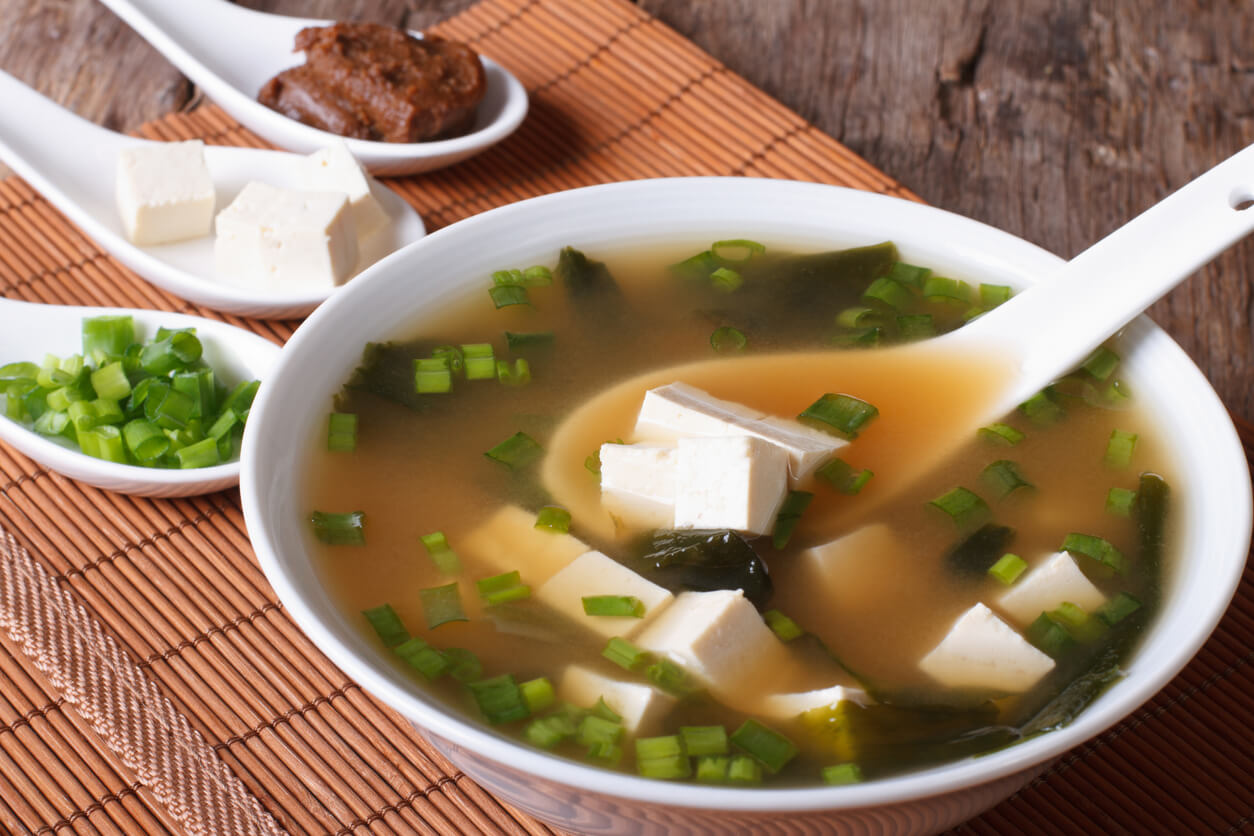 What Is the Best Instant Miso Soup?

As we already mentioned, miso soup is the best choice for those who are both hungry and in a hurry. There are various kinds of light and tasty meals and it is very difficult to decide which one is the best. However, some of the most popular brands in Japan:

What Are the Types of Miso Soup?

There are four main types of Miso:

• Red Miso Red Miso is made from barley, rice, and soybeans. It is the saltiest Miso you can get.

• Barley Miso It is made from barley and soybean and has a distinctly salty taste. It’s also good for seasoning.

• Mixed Miso (also known as Awase Miso) It has a mild taste and it is basically a mixture of white and red miso.

• White Miso (also known as Shiro Miso) It has a sweet flavor and is usually used for salad dressings. It’s made from white rice and soybean.

Now that you’ve gotten to know a little bit about miso soup, we think it’s time you give it a try, don’t you? Stop by our place, for a taste of the absolutely divine White Miso Soup, as well as a variety of other dishes that feature miso. Shall we save you a table for two?