Fans of sushi can be found all over the world. They live on all continents, in all time zones.

Since sushi can be served as a regular restaurant meal and as a snack to be eaten on the go, it is very popular among the general population. However, there are some very interesting details about this dish which may not well-known. Also, there are some misconceptions that are very common when it comes to sushi as well. If you are curious by nature and like to go into detail to find out as much as possible about the topics that interest you, and if one of those topics happens to be sushi, then this article is for you. Have you ever wondered if there is such a thing as sushi without rice? Or, for example, what do all those chefs do with the leftover sushi after they are done preparing this amazing dish?

Sit back, relax and read through our list of the 11 things you didn’t know about sushi.

If you are eating in American restaurants, you are most likely being served a combination of mustard and horseradish. Green food coloring is also a very common ingredient. In most cases, the main emphasis is on the horseradish. Sometimes they use ginger as well, which is a bit sweeter. This is sometimes presented as a wasabi and ginger sauce. Don’t be alarmed. Real wasabi is not very common even in renowned restaurants in Japan. Since we are talking about a plant that is very difficult to grow, this should not take you by surprise. True wasabi is the grated root of Japonica, which originates from China and the southern parts of Japan. Therefore, it is very rare outside this region and this makes it expensive and difficult to obtain as well. In certain restaurants, you may be able to order it but you will probably be charged additionally.

Sushi Started Out as Fast Food

Since it could be eaten on the go, in a theater or in public, sushi became popular as an early

“take out.” It became a vital part of Japanese cuisine. Once the Japanese started producing sushi in a more industrialized manner, it became what we call fast food today. Eventually, during the 20th century, it evolved into a work of art you can find in restaurants around the world today.

One of the most popular types of sushi in the U.S. at the moment is the so-called Philly Roll.

Chinese Were the First to Make It

Even though it appeared in Japan during the 8th century, it originates from China. The Chinese developed a method of food preservation in which they stored fish in marinated rice. After a while, they started consuming the rice together with the fish, and as a consequence, sushi was established as a crucial source of protein for the Japanese people. It remains one of the main pillars of Japanese cuisine until this day.

It Doesn’t Have to Be Raw

In Japanese, sushi means something along the lines of seasoned rice or vinegared rice. It is a very common misconception that the ingredients used for the preparation of sushi can be raw only. People usually assume that sushi is raw because it is mainly served cold. However, today’s sushi contains various cooked additions which made it evolve into the perfection that satisfies the needs of the demanding 21st-century consumer. Some of the most common and most delicious ingredients are grilled squid, cooked shrimp, steamed clams, cooked crab, smoked salmon, and many others.

The fascination with virtual currencies keeps growing. The most popular one, of course, is the

crypto-currency called “Bitcoin.” Since purchasing stuff online is not a new thing anymore,

The same goes for buying sushi. It is easier than ever. Restaurants in France offer this service and America is slowly but surely catching up on this trend.

Some See It As a Work of Art

Taste is not the only thing sushi chefs take into account when preparing great sushi.

They also dedicate a significant amount of attention to details such as plate presentation.

Therefore, we may conclude that they are not trying to satisfy only your taste buds, but your eyes as well. Chefs from different parts of the world prepare and arrange sashimi and sushi in their own unique way. It takes years to learn the skill of sushi making. The main focus of sushi art is natural beauty and simplicity. Some sushi chefs, therefore, believe that by using different colors and flowing plate presentations, they can capture the actual motion of fish.

The Way Sushi Is Supposed to Be Eaten

Many types of sushi are made to be eaten with fingers. One of those is the Nigiri sushi or the

“hand-pressed sushi.” Even though it might seem tempting to acquire the skill of using chopsticks, sushi is actually supposed to be eaten with your hands. Tamaki, which has a long shape, is expected to be eaten with one’s fingers. The usage of chopsticks with some kinds of sushi is very difficult and unsuitable. Keep in mind that originally, sushi was created to be

consumed “on the go.” In a number of high-end restaurants, you may even get the “oshibori” (a steaming hot towel). 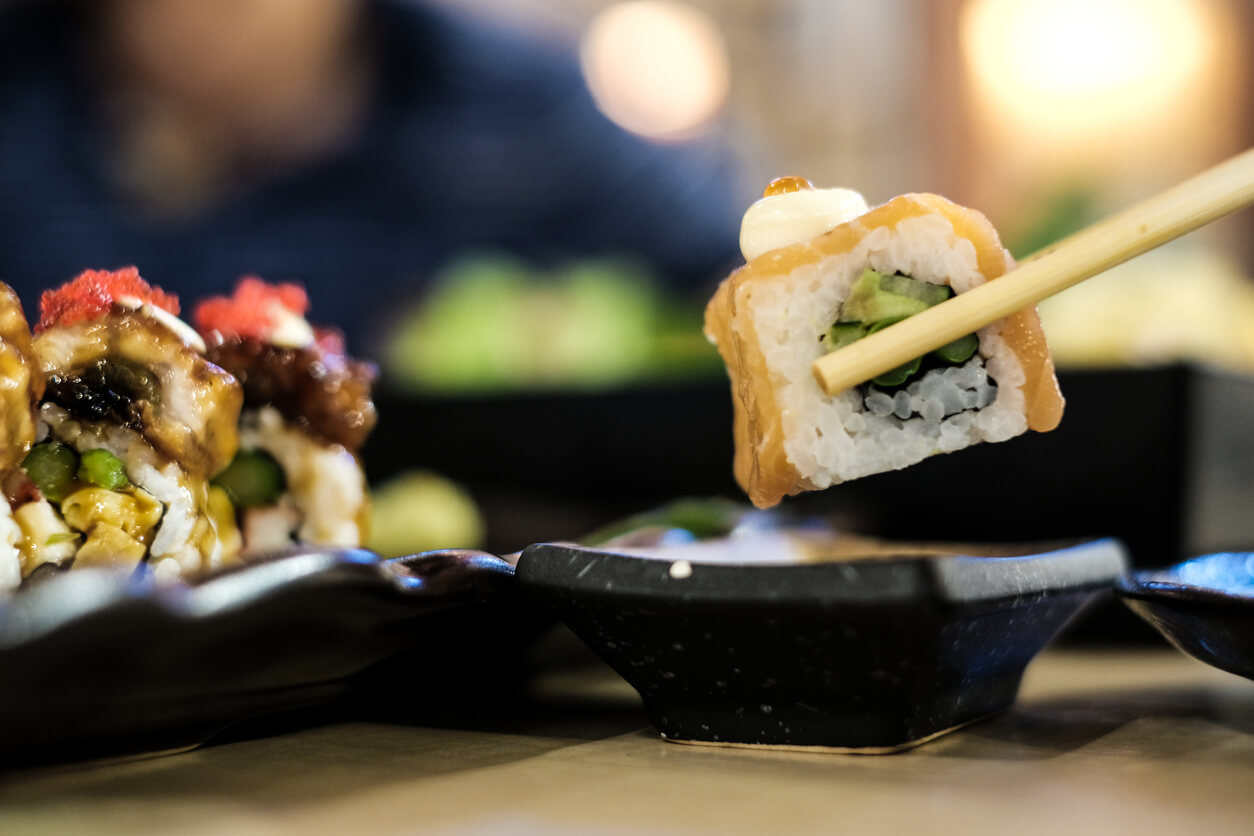 Rice on the Outside Rolls Is Not Traditional

The popular California roll was actually invented in America. The main characteristic of this roll is that it has rice on the outside. We could trace the origins of California roll all the way back to the 1970’s LA. Rumor has it that a sushi chef ran out of seasonal ingredients and decided to improvise a little. He used crab instead of fish and substituted avocado for tuna. Since he figured out the seaweed was too risky for an average Los Angeles consumer, he decided to move it inside the roll. This is how the California roll came into existence.

When eating sushi, you should trust the instruction of those who made it. One of the most

common mistakes sushi eaters make is putting too much soy sauce. Be careful with it if you don’t want to ruin your sushi experience or simply don’t use it at all. The best rice for sushi is the one with its natural flavor. When it comes to liquid, rice behaves like a sponge. Absorbing too much liquid can make the roll fall apart. Sushi is usually served on a wooden plate and this is not by chance. The plate’s purpose is to keep the rice at the right consistency. Therefore, you should keep in mind that adding any liquid may affect the overall sushi experience. Sushi is supposed to be eaten immediately after it is made. This is of course if you want to experience the best flavor it can offer.

You are probably aware that this is something that happens to all living creatures after they die.

Sooner or later their flesh hardens. This is due to the release of protein ions. Consequently, no fish tastes better than the one coming straight from the sea. One way to avoid this, or at least delay the process a bit, is to freeze the meat. However, the smartest move is to always ask for the fresh catch of the day. You needn’t worry about this at Casa Sensei – all our ingredients are top-quality and fresh!

Salt or Vinegar Before Slicing

Both rice and fish are treated before slicing or serving. Salt and vinegar are most commonly used. The role of vinegar is to neutralize the smell. This is also known as “su-jime” in Japan. In case the fish is still too moist, some salt will be applied. This sushi is called “shio-jime.”

There you have it. We hope you learned something new and we also hope we made you hungry, just a little bit. If so, make a reservation and dip your taste buds in first-class Pan-Asian Latin cuisine, right here, at Casa Sensei. 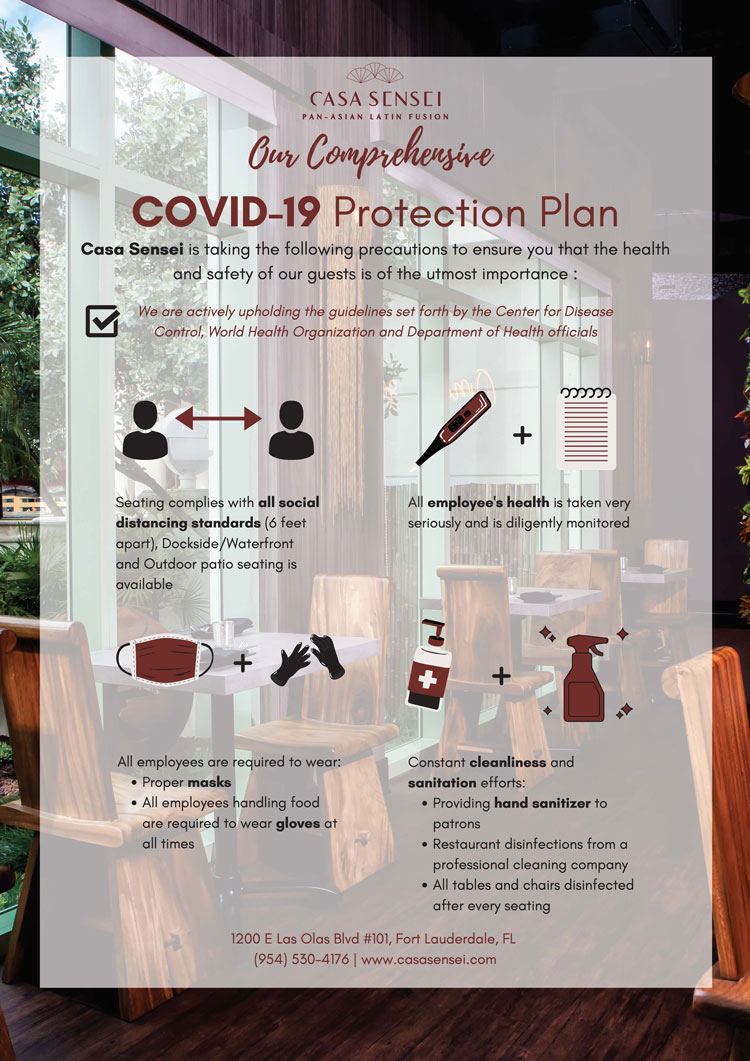